The cabin’s original rock foundation was deteriorated due to the weight of over 140 years of accumulating snow weighing the roof down.

During renovations, the cabin was moved 60 feet to the south and given a concrete foundation. The historical cabin was preserved while at the same time updating fixtures in the interior for modern day visitors. The moving of the Swearingen Homestead Cabin onto Cement Foundation

The Cabin Before Repairs Swearingen Homestead Cabin in its original location and before major renovation. The metal roof was replaced and some shoring added up in the interior was done to stabilize the cabin, all executed by the prior owner.

The interior of the cabin features a working wood stove. The cabin’s historical aspects were preserved while also making the cabin comfortable for modern visitors. The interior spaces of the cabin provide a time travelling experience all the way back to the homestead era.

Winfield Swearingen created the old ranch access road in 1886.  This old road runs from the old log cabins (where the road ended) and continues on the side of Dry Creek.

It’s a beautiful road with nice trees and foliage, Dry Creek running the entire length. The creek is much straighter and changes in elevation more gradually than the new road.

While this “road” has been the sole access road to the ranch for 140 years, the Basalt Fire Marshall would not grant a certificate of occupancy to any residential structures as long as the old ranch road continued to serve as the only access road. A new bridge was constructed to go along with the new access road into Deadwood.

The bridge is an impressive structure that links West Sopris Creek Road to the rest of the new Swearingen Way.

Pictured here is the bridge while it was being constructed. On our home page, you may have noticed the original visualization created by the architect who designed the bridge. A considerable amount of money and about four years with attorneys and land planners were involved in fighting with the County and Town about constructing the bridge and access road so the road would run through the center spine of the ranch. Here, Willie is shown standing next to the stone bridge abutments.

Down Under The Bridge

Pictured here, are the girders on the bridge as seen from below.

Just in case you thought the bridge wasn’t very big, this is Mickey on the side, next to the girders.

The new road starts from West Sopris Creek Road, goes over the bridge, climbs the side of the mountain using a series of switchbacks, enters the pastures and “Y’s” off the pastures in several hundred feet.

Our new pathway continues past the old cabins, again using a series of switchbacks, going to the residential envelope where eventually we will build additional cabins.   This entire road (including the short segment of the old ranch road you drove on) is officially named Swearingen Way.  From beginning to end it is over 8,000 feet. 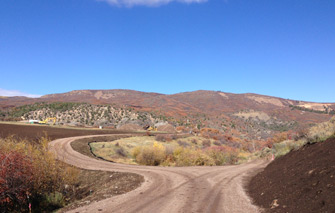 Due to the mostly arid landscape of Colorado, water is in high commodity and often legally contested. In fact, water rights in Colorado are so important and heavily litigated, Colorado has created “Water Courts” throughout the state.

As you will see from the aerial photo to the right, Deadwood Ranch is fortunate to have flowing water coming onto the ranch from the north, west and south.  The water literally runs throughout the ranch and at several different levels.

However, just because water runs through your property does NOT mean you have ANY rights to the water.  In Colorado, the law as to water rights has developed since the mining days of the 1800’s.  The first person who diverts and uses flowing water for their own benefit, owns that amount of water they used, if the diversion and use was documented with the State, it is called “adjudication” or “decree”.

Our water rights to the Highland #2 are pretty good – we are #7 and entitled to 1 cubic foot per second, as long as the six owners with superior water rights are able to take the amount of water they have the right to. Since the pastures, which total 100 acres, are officially deemed “historically irrigated pastures”, we are permitted to continue to use water to irrigate them.

The local water commissioner, Bill Blakeslee, regularly comes out to close the “headgates” so that the water is redirected into the waterway that navigates the water to the person with the superior water right.